Skip to content
HomeScotland Before the Bomb by M.J. Nicholls

I’ve read this in an unconventional way and I haven’t finished it, but I’ve read a substantial portion. I began with a couple of the episodes that were on themes I warm to. 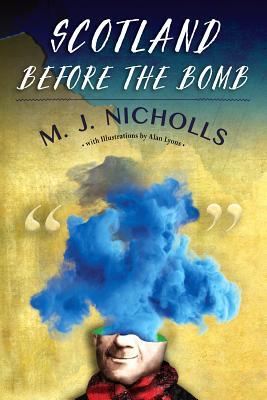 The first, a diatribe on the Fringe Festivalisation of Edinburgh. As a resident of Adelaide, at the other end of the world, which vies each year to be bigger than Edinburgh, I entirely sympathise. These festivals suck. They suck the life out of theatre for the rest of the year. They suck the life out of originality and complexity. As Fringe Festivals around the world become more and more about extracting money ‘for the economy’ from back packers, many of whom have no English, linguistic complexity is an absolute no-no. Preferably one can dispense with language altogether. Physical ‘theatre’ take a bow.

The next one I turned to was about Amazon. Our future Amazon-driven world. I’ve listed this book under comedy, but the laughs are often bitter.

Having a couple under my belt that I immediately took to, I started dipping into others. This is a strange, compelling book, probably because the author doesn’t give a flying f*ck about the reader. He is doing what he wants. As Odetta (among others) had it:

I’m a rambler, I’m a gambler
I’m a long way from home
And if folks don’t like me
They can leave me alone

MJ makes me think of these words, it’s really lonely, doing what you want. The audience for this book is consequently niche, but I recommend you find out for yourself if you are part of it. At the very least it’ll do you good to be out of your comfort zone.

My favourite is Tickertape of Misery. Anybody who has read the book may laugh at the idea that I forced somebody to listen to me read the whole piece out loud. I’m pleased to be able to report we are still conducting conjugal relations.

Kudos to the author for employing a real artist to do pictures for the book, Alan Lyons has a striking style which genuinely adds to the finished work.

To end with a small rant about the ‘star’ system. I want to give this three stars, but we live in a world where that’s failure. I don’t think it is at all, but my opinion doesn’t count. So, I’ve given it four stars because I think that reflects how others use the star system and that probably matters.

5 thoughts on “Scotland Before the Bomb by M.J. Nicholls”

This House of Grief by Helen Garner

Portraits of Artists by John Berger

Finished, not yet reviewed:

On the Back Burner we have:

The Collected Stories by Leonard Michaels

What is Intelligence? Beyond the Flynn Effect.

Letters from France and Italy by Herzen

Roast Chicken and Other Stories by Simon Hopkinson

Follow A little tea, a little chat on WordPress.com